UPDATE:  As of 2021-2022, Dr. Faith Kuehn and others are working to restore and document the history of the NCCH Cemetery.  An historical marker has been installed, along with signs, and a parking lot constructed for visitors.  A dedication ceremony was held on November 1, 2020, and there are further plans to create educational markers.   Cleanup of the vegetation at the site is ongoing.  A lovely bench for sitting and contemplating has been installed.  Dr. Kuehn and her volunteers are planting native flora, and have applied for several grants to continue the work of restoring and maintaining the burial grounds.  Kathy Dettwyler is currently paging through the online Certificates of Death for New Castle County to find more people buried in the cemetery.  As of October 1922, she has completed the years 1908-1925, adding more than 1,000 new names to the database.  Hal Brown is adding the information to the www.findagrave.com site, including newspaper reports that illuminate many of the deaths.  Still to be completed are years 1891-1907 and 1926-1933.  This part of the project will hopefully be completed by mid-2023.


New Castle County Hospital/Almshouse Cemetery, also known as the Farnhurst Potter's Field and the "Cemetery in the Woods at Farnhurst"

This cemetery includes people who died while in the Almshouse/Hospital between 1891 and 1933 who had no other means of burial.  The cemetery also served as the New Castle County Potter's Field during this time.  The NCCH/Almshouse and Cemetery were closed in 1933.  Most of the people who died at the NCCH/Almhouse and buried here were elderly, poor, single, African American men.  As the NCC Potter's Field, the burials here also include the products of miscarriage, premature infants who did not survive very long, stillborn infants, infants who died within the first few months of birth from various causes, unidentified coroner's cases, murder victims, accident victims, and other miscellaneous individuals whose people could either not be located, or who could not afford a burial elsewhere.  Often more than one individual was buried under the same numbered marker.  The most burials found so far in one grave was six.  Black and white people were buried in the same grave without respect to race.

Originally, burials in the NCCH Cemetery that originated in the hospital itself were recorded in a series of Death Books, but these were thought to have all been destroyed.  Certainly when the highway was built over the cemetery in the 1960s, no one seemed to have any idea how to identify the people buried at the site.

Kathy Dettwyler and Hal Brown constructed a database with the names of about half of the people buried in this cemetery, including their date of death and other information we could glean about them.  We began by combing through the online State of Delaware certificates of death (COD) for people whose COD included the term Farnhurst.  People buried at the NCCH Cemetery are distinguishable from those buried in the DSH Spiral Cemetery either because they are described as living at the NCCH vs. the DSH, and/or because their CODs were signed by the respective directors of the institutions.  We searched the CODs for 1891-1933, where the COD indicated that the person died at the New Castle County Hospital and was buried at Farnhurst (not including those buried at the DSH Spiral Cemetery), or that they died elsewhere but were buried at the "NCCH Cemetery", or "Farnhurst", or the "County Cemetery" or the "County."  In 2018, Kathy discovered that one of the Death Books from the NCCH/Almshouse (the one covering the final years of the Cemetery,1926 to 1933) still exists in the Delaware Public Archives, despite published claims that all of the records had been lost or destroyed.  Kathy transcribed all the names from the final Death Book to the database as well, and Hal put them up on findagrave.com.   Beginning in the summer of 2022, Kathy began combing through the online CODs for New Castle County identifying people who were buried in the cemetery but whose COD did not contain the word Farnhurst (or at least, they weren't identified as such in the original computer search).

Hal Brown has posted these findings to:
https://www.findagrave.com/cemetery/2568624/new-castle-county-hospital-cemetery

Currently there are just over 2,148 entries on the findagrave website.  Some of these are listed in error by other people and we have requested that they be removed.  If the date of death is after 1933, the person is not here.  There were just under 3,000 burials, we think, although the newspaper article posted below claims 4,000 burials.  Progress continues on this aspect of the project.  Most of the grave markers were covered up by the I-295 ramp to the Delaware Memorial Bridge in the 1960s, but about 100 remain visible in the woods next to the road that leads to Baylor Women's Correctional Institution.

These photographs of the cemetery were provided by Hal Brown: 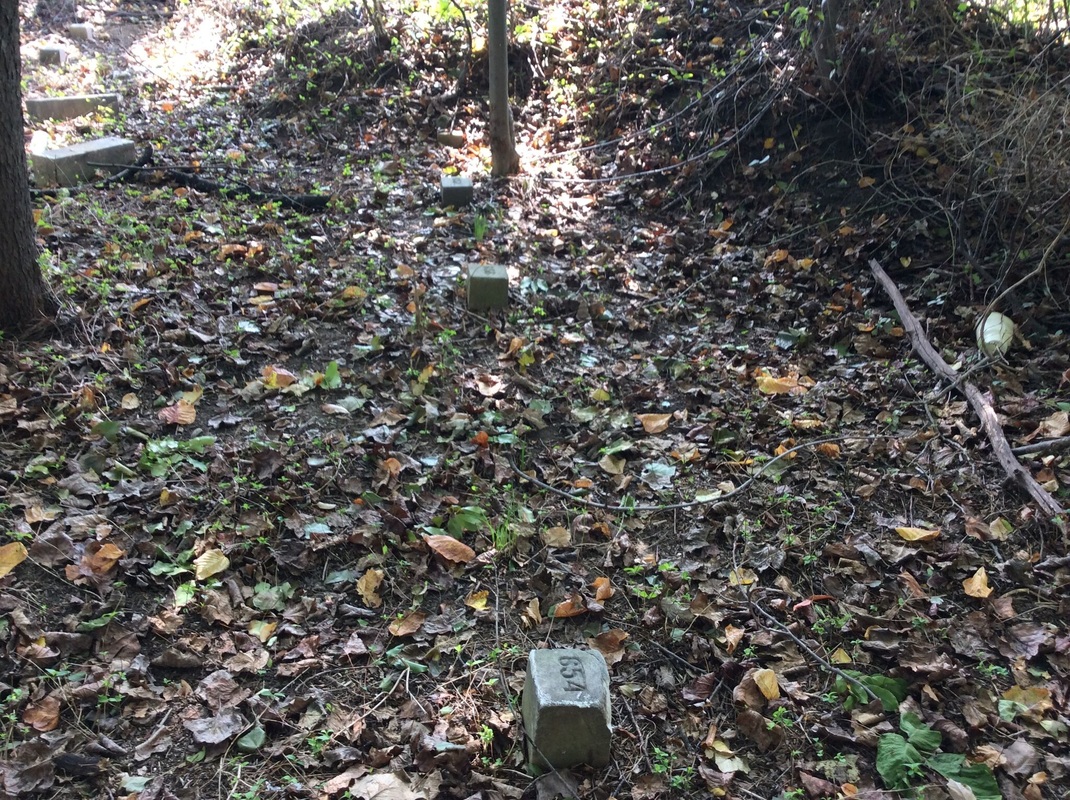 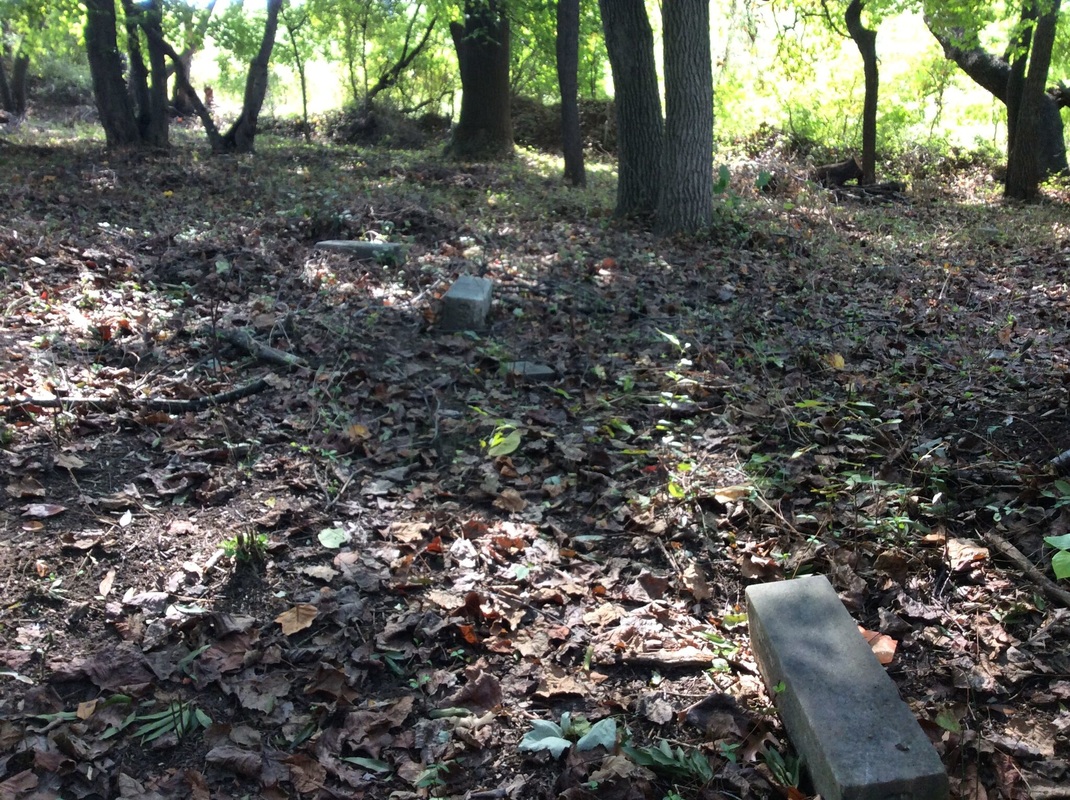 The Sunday Morning Star, April 24, 1938,
​page 34
Under a column titled “Ramblin’ Round” which has several unrelated stories

“Announcement by Dr. Tarumiaz that the Delaware State Hospital, if it can get WPA help, will turn the neglected unsightly Potter’s Field near the institution into a neat and cared-for burial ground will be gratifying to many persons who have been shocked to note the condition into which the grounds had fallen.  There are about 4,000 graves in the Field, many of them of Civil War veterans, and it is a commendable work of good citizenship to convert their last resting place into a cemetery which at least shall be inoffensive.  Which reminds me that there are many old burial grounds throughout the State that might well enlist the sympathetic interest and loving care of the descendants of those buried in them.  Truth to tell, this writer leans toward cremation as a means of disposal of the dead, but where bodies are committed to earth, it seems only respectful and considerate to make their last resting place neat, clean, well-kept.”
NOTE: Research to identify Civil War Veterans (and other military veterans) is still on the list of projects, but has a low priority at the moment.
PROFILES IN OBSCURITY -- click here
Proudly powered by Weebly