History of the Delaware State Hospital 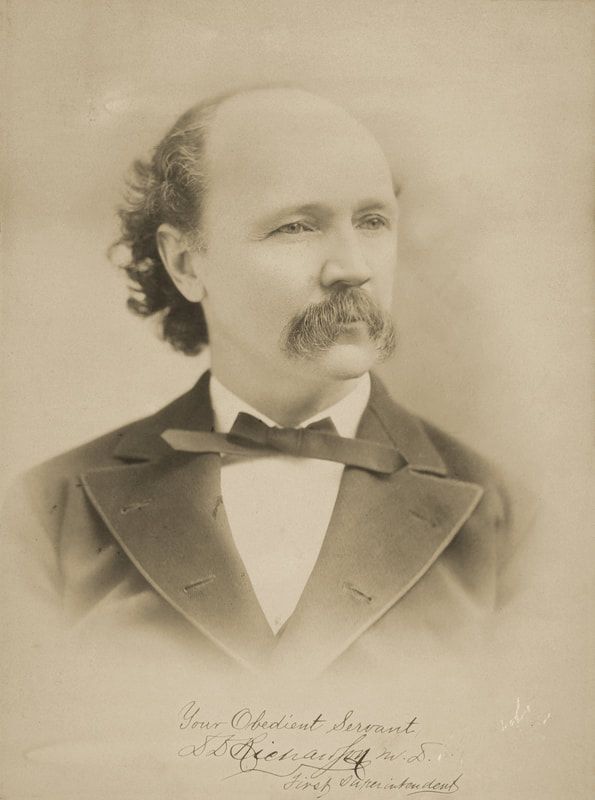 This is a brief excerpt from Chapter Two from Remembering Farnhurst.  It describes the first three superintendents.  ​

David Dorrington Richardson, M.D.  The first Superintendent of the Delaware State Hospital for the Insane was Dr. David Dorrington Richardson, originally of Philadelphia (Fig. 11).  Dr. D.D. Richardson, as he was known, was born in 1837 in Richmond, Virginia.  Details vary depending on the source, but at some point in the 1850s, David Richardson moved to Lexington, Kentucky, to study medicine at Transylvania University.  His brother John B. Richardson also lived in Lexington.  While in Lexington, he met and married a young widow, Margaret Spear Hancker, who had a son, William Henry Hancker, from her prior marriage.  In 1856, Dr. and Mrs. Richardson had a daughter named Clara Virginia Richardson.  They had two more children, both of whom died in early infancy (Franklin Bache Richardson, who died May 25, 1864 of catarrh; and Georgie Estelle Richardson, who died October 30, 1867, also of catarrh.  Both infants were buried in Mount Moriah Cemetery in Philadelphia).
Dr. Richardson received his first medical degree from Transylvania University in 1858.  He and his young family then moved to Philadelphia and he opened a school to prepare young men who were intending to go to medical school, as well as young men in the military.  After several years, he became the resident physician at the Northern Dispensary in Philadelphia, where he served until 1866.  At the time, he was appointed to be the Superintendent and Physician in Chief of the Philadelphia Hospital (Almshouse), Department for the Insane (known as “Blockley”).  In 1871, he received his second medical degree from the University of Pennsylvania.  He remained at the Philadelphia Hospital until 1879, when he was tasked with starting up the State Hospital for the Insane in Warren, Pennsylvania.
In July of 1881, he was asked to come back from Warren to the Philadelphia Hospital.  He served as the Superintendent of the Insane Department there until 1886, when he retired to go into private practice.  After just a few years, he was asked to come to Delaware to be the first Superintendent of the newly opened Delaware State Hospital for the Insane.  He acted in that capacity until 1893, when he left to become the Superintendent at the State Hospital for the Insane in Norristown, Pennsylvania.  He remained there until his death from heart disease in 1906.

Dr. Richardson’s career was not without controversy, as he was accused of being too harsh and overbearing in his dealings with his employees and with other Almshouse officials at Blockley, but he was known for his talents and kindness in caring for the less fortunate.  One article about him epitomizes his outlook, and offers insight into his philosophy of care:

From the Philadelphia Inquirer, 12/19/1884, p. 2: “Dr. Richardson Speaks.  The Rumor of His Removal by the Almshouse Guardians Induces Him to Explain.  The difficulties that have arisen between Dr. D.D. Richardson, superintendent of the insane department at Blockley, in regard to his relations with other offices of the Almshouse, which has come under cognizance of the Board of Guardians of the Poor in such a shape that there have been hints at Dr. Richardson’s removal, has brought forth a letter of explanation.
In this, Dr. Richardson says that his experience as physician and chief of the insane department covers a period of eighteen years; that in regard to statements that he has acted in an overbearing manner to subordinates, he admits the charge if it means requiring men and women to treat the insane with kind consideration, and not to slap and kick them or break their bones; he protests that his relations with the officers of the house are of a friendly nature, and all past misunderstandings have been adjusted; he disclaims intent to be discourteous or dictatorial to members of the Board of Guardians in efforts to sustain himself with regard to reports of insubordination among his inferiors; he maintains that rigid discipline is essential to good order where so many afflicted persons are to be cared for, and that it has always been a pleasant duty to attend to the wants and comforts of the insane; the trying part of his position, he says, is contending with some unprincipled attendants who have no sympathy for the lunatics.”

Dr. Richardson’s wife Margaret died in 1894, in Norristown, of heart failure.  She was buried at Lexington Cemetery in Lexington, Kentucky.  Dr. Richardson continued his work at the Norristown Asylum until his death in his office from heart disease and nephritis, on March 6, 1906, with his daughter Clara by his side.  “Dr. Richardson had often expressed the desire that his remains be cremated, but he desired that for a week after death his body be kept on ice, and his arm arteries cut, to make doubly sure that he was dead.  He did not wish any embalming fluid injected into his body.”  (Reading Times, 3/9/1906, p. 5).  He was buried at Lexington Cemetery.
His daughter Clara never married.  She lived with her parents at the Delaware State Hospital and then at Norristown State Hospital until her father died in 1906.  She died in 1932 and was buried with her parents in the Lexington Cemetery in Lexington, Kentucky.
​
William Henry Hancker, M.D.  William Henry Hancker was born around 1850 in Philadelphia to Horatio A. Hancker and Margaret Hancker.  Little is known of Horatio Hancker, but he apparently died when William was a young boy, and the family was living in Lexington, Kentucky.  Margaret Hancker remarried David Dorrington Richardson, who was in Lexington attending Transylvania University, studying medicine.  In 1856, their daughter Clara Virginia Richardson was born.  In 1858, the family moved back to Pennsylvania.
At a young age, William Henry Hancker began attending school at Girard College in Philadelphia.  Girard was a residential school for “poor, white, males” who were either orphans or had only one living parent.  In the 1860 census, William was listed as a student at the school, age 9.  In 1866, he graduated from Girard, and began studying pharmacy with his step-father at the Northern Dispensary.  In the 1870 census, age 19, he was living with his mother Margaret and his sister Clara, age 15.  Margaret was working as an attendant at the Blockley Almshouse, and the family was living at the Almshouse in quarters furnished for William’s step-father, Dr. D.D. Richardson, who oversaw the Insane Department.  He graduated from the Philadelphia College of Pharmacy in 1870 and began attending the Jefferson Medical College.  He graduated with an M.D. in 1873 and became the assistant to Dr. Richardson at the Insane Department of Blockley Hospital for two years.
In 1875, Dr. Hancker moved to Winnebago, Wisconsin to become the Assistant Superintendent at the Northern Hospital for the Insane.  In 1879, when he was 29, he married Jane (Jennie) Griffith, age 20, in Fond du Lac, Wisconsin.  In 1882 he resigned from the Northern Hospital to go into private practice as a physician, but quickly returned to Northern Hospital and stayed there as the Assistant Superintendent until 1890.  At the point, he rejoined his step-father at the newly-opened Delaware State Hospital at Farnhurst, Delaware, where Dr. Richardson had become the first Superintendent, and Dr. Hancker served as his assistant.  In 1893, Dr. Richardson left DSH to become the Superintendent of the State Hospital at Norristown, Pennsylvania, and Dr. Hancker took over as Superintendent at DSH.
Dr. Hancker was thus uniquely qualified to be the superintendent of a state hospital, having grown up under the care and tutelage of his step-father, Dr. D. D. Richardson, and having an extended apprenticeship under him, as well as at the Northern Hospital for the Insane in Wisconsin.  He would serve as the DSH superintendent for the entire period of admission covered by the ledgers used for this book, from 1894 to 1920.  He was a lifetime member of the American Psychiatric Association.  He was an early adopter of the new X-ray technology at the turn of the century.  He was “among the first in this country, and surely the first in the State of Delaware” to use Röntgen rays to locate a ball “in a lad’s foot, a patient of mine, that had been buried there for several years.”  (Black, 1900:123).
Dr. Hancker was once chastised by members of the local Catholic Church for posting an ad in the local newspapers for an Assistant Physician at the hospital, specifying that the applicant should be “Protestant.”  He apologized and changed the ad.  He ably represented the hospital during the trial of three attendants for the suspicious death of patient Leon Pisa (one of the case studies).

​Dr. William H. Hancker in 1921.  This photo accompanied a newspaper story about his recovery from ptomaine poisoning thought to have been caused by eating bad clams in Philadelphia (the Wilmington Evening Journal, 23 December 1921).
Dr. Hancker served as the Superintendent of DSH until ill-health forced him to retire in 1925.  During that time, he lived in the Superintendent’s Residence (the T Bldg.) with his wife Jennie and her mother, Jane M. (Riddle) Griffith.  Jane Griffith died in 1916 and was buried at Mount Moriah Cemetery in Philadelphia.  William and Jennie Hancker never had children.  Dr. Hancker retired in 1925 due to ill health.  Jennie died in 1930 of a stroke, complicated by uterine cancer.  She was buried at Mount Moriah with her mother.  William H. Hancker died in 1933 of chronic myocarditis and nephritis and was buried with his wife at Mount Moriah in Philadelphia.

Mesrop A. Tarumianz, M.D.  Dr. Tarumianz took over as the third Superintendent, and served for the next 42 years, until 1961, including most of the time that patients admitted between 1894 and 1920 were patients at the hospital.  Dr. Tarumianz had joined the staff in 1918 after fighting for Russia in WWI.  During his long tenure at DSH he oversaw many ‘innovations’ in the treatment of the patients, including the introduction of insulin therapy, electro-shock therapy, lobotomies, and Thorazine and other medications.  He was a staunch proponent of sterilization of the mentally ill and cognitively impaired.

Dr. Tarumianz, with his trademark carnation boutonniere.  Courtesy of the Delaware Historical Society.

History of the DSH Spiral Cemetery, written for the dedication of the restored cemetery on May 9, 2016

Download File
A discussion from a genealogical web site chat about "Seven Stacks" -- an old name for the Almhouse/DSH combined -- the two buildings together had 7 smoke stacks or chimneys.

Download File
The October 1923 issue of Equitable Monthly was dedicated to a description of the various hospitals of Delaware, including the Delaware State Hospital. ​